I recently had the pleasure of checking out Blizzard's newest free-to-play time sink, Hearthstone: Heroes of Warcraft on the iPad. Yes, I know it's hard to imagine me touching an iDevice but it happened. After my eyes stopped burning from the retina display I was able to play this wonderful new game from the makers of World of Warcraft.

Let's get the basics out of the way. It's a (CCG) collectible card game. Wait, don't leave yet. It's a FUN and EASY card battle game. You get to battle friends, foes, and AI for gold. You still with me? This isn't as complicated Magic the Gathering, nor is it as fast-twitch StarCraft either; it's basically a user friendly one-on-one, quick, simplified chess match... but with cards.

Hearthstone eases you into battle b y laying out the simple card attack/health point system and treating you to a very friendly and reassuring tutorial to get you started. In these one-on-one turn based battles you are dealt random cards that you use to whittle down your opponents health points. These cards are all drawn from the extensive Warcraft lore- complete with beautiful art, animations and sounds.

Now, with super simple rules and mechanics what else is there to love about this game? Well, Warcraft noobs and vets alike will appreciate the easy learning curve that is simple to understand but also allows for some high level fun and strategic gameplay. I did mention that this was a free to play game, but fret not... It's not a pay to win affair at all. A well managed deck could easily be defeated by a lucky hand. As for the decks; they can be purchased or earned and success is never guaranteed in any matchup. All you need to play is a free blizzard battle.net account and once you log in you can play on PC, Mac, and iPad (android tablets, phones, and iPhone support coming soon). You play against opponents to finish daily quests and to gain gold which you can use to buy new decks to take into battle. You can also play against your battle.net friends.

I took to the stream and played a couple matches. Observe as I narrate and execute flawless victories in this gameplay video!

As someone who isn't particularly fond of (or good at) card battle games, HearthStone: Heroes of Warcraft took me by surprise and quickly won me over (and it's super addictive). Charge up your iPad or laptop and kiss your family goodbye for hours at a time. Look for me online @awesomerob029, battle.net ID: "bigrob029#1218" I need some new friends to play with. 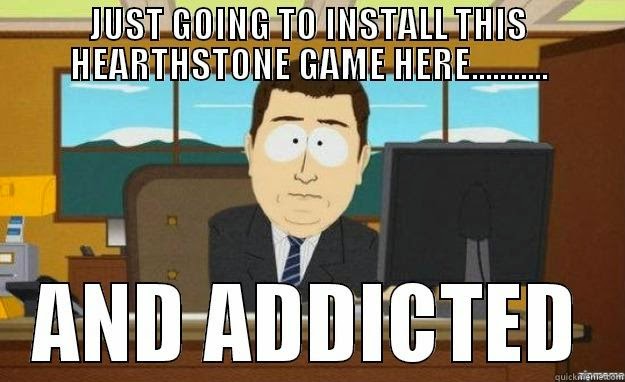