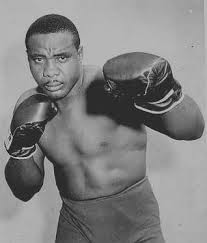 Sonny Liston (1932 - 1970) was the heavyweight boxing champion from 1962 to 1964. He rose from poverty in the rural south to become one of the most dominant and feared professional fighters of the 20th century.


Liston was born in St. Francis County, Arkansas, around 1932. Very little is known about his birth and his childhood. His birthday is most commonly given as May 8 of that year, although he may have been born as early as 1927 according to some accounts. Liston’s parents, Tobe Liston and Helen Baskin, labored as tenant farmers, and put all their children to work harvesting cotton at their side. A middle child among more than 20 born between his parents and their several relationships, Liston never received any formal education. He later claimed that his father was a brutal man who meted out punishment with a whip. Liston worked the fields until age 14 when he moved with his mother to St. Louis, Missouri. Already approaching his stature of more than six feet tall and two hundred pounds, he had no trouble finding work as a manual laborer. 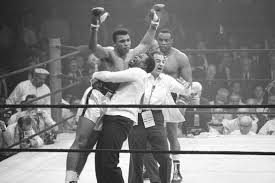 Constant poverty, low wages, and the urging of peers to use his strength for intimidation and mugging soon lured Liston toward a consistent pattern of crime. After consistently falling under suspicion for theft and
robbery, he finally was caught, tried, and sentenced to five years imprisonment at the Missouri State Penitentiary in 1950. In prison, Liston began to express an interest in religion and to take the counsel of the Catholic chaplain. The chaplain, in turn, had noticed Liston’s tendency to fight with other prisoners, and determined to focus his strength and temper Liston’s ferocity with discipline in the boxing ring.

A rigorous physical regimen suited Liston, and he responded well to training. He soon became the foremost boxer at the penitentiary. Sensing his potential as a prizefighter, a newspaper publisher and a Catholic priest—both associated with St. Louis mobster John Vitale—arranged for Liston’s early parole in 1952. He was hired by Vitale to work as a union-buster while he trained to enter the world of professional boxing. Learning the ropes from a sparring partner of famed boxer Joe Louis, Liston quickly gained skill and speed in the ring. A left-handed fighter with enormous fists, his punching power was intimidating, and he quickly worked his way through the amateur ranks. A notable victory came toward the end of 1952 when he easily defeated Ed Sanders, the reigning Olympic heavyweight champion. Liston turned professional the following year and began to compile a record comprised almost wholly of victories, most often by knockout.

Liston met and married Geraldine Chambers in 1956. The marriage was a happy one, despite the fact that 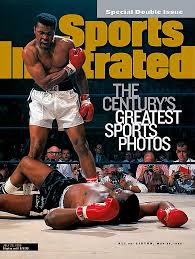 his reputation for violence was not confined to the ring. Liston was known to street fight and continued to have occasional trouble with the police, once remanded to a labor house for assault on an officer. He also never broke his close ties to the mobsters who had helped arrange his release from prison and who managed his career. In 1958, Liston and his wife moved to Philadelphia. He finally had escaped from the poverty in which he had been raised and was able to make a decent living. All that awaited him was a championship bout.

It was not until 1962 that the reigning heavyweight champion, Floyd Patterson, agreed to fight Liston. The two fighters had extremely different personalities, and the media played up the bout as a battle between good and evil. Whereas Liston was quick-tempered and had a criminal record, Patterson was quiet spoken and courteous; he was considered by many to be an ideal African American sports figure to capture the public eye. But Liston was the superior boxer. He defeated Patterson with a first round knockout and claimed the title. Patterson challenged Liston to a rematch in July of 1963, but the result was exactly the same.

For the next two years, Liston wore his championship proudly. He toured Europe and Great Britain and was, in general, a more amiable public figure than people had thought. His reputation in the ring, however, remained as formidable as ever. Much of the world was shocked when a fast-talking young boxer named Cassius Clay defeated Liston in 1964. Because the champion withdrew in the seventh round, there was widespread suspicion that his mob-connected managers had fixed the fight to generate larger betting and ticket sales during a rematch. A special commission investigated, however, and concluded that there had been no wrongdoing. When the rematch finally came in May of 1965, Clay had taken the soon-to-be world famous name of Muhammad Ali as part of his conversion to Islam. Ali knocked Liston out in the first round and went on to become the single greatest boxer of the 20th century.

Although he was never again a title contender, Liston continued to box and to enjoy family life. He and his wife adopted a child in 1967 and settled in Las Vegas, Nevada. But Liston’s long-time ties to the mob kept a grip on his activities. Rumors began to circulate that drug dealers were using him as a bodyguard during illicit exchanges. Liston never ran into trouble with the police again, but in January of 1971, his wife returned from a vacation to find him dead from a heart attack with traces of heroin in his blood. Liston’s official date of death is December 30, 1970. 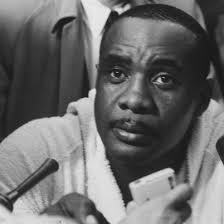 The American public struggled with the image of Liston as a champion, but much of the rest of the world identified with his rise from poverty and the success he was able to achieve with brute strength and aptitude. He remains a legendary boxer whose only notable defeat came at the hands of Muhammad Ali. In 1991, Liston was posthumously inducted into the International Boxing Hall of Fame.

Posted by SherrysJoy at 6:00 AM