Oliver Wendell Harrington (1912- 1995) was one of America’s most talented and influential political cartoonists in the decades between the Great Depression and the end of the Cold War. After leaving the United States during the McCarthy era, he became a key member of the African American expatriate community in Paris, and lived out his final years in East Germany.

Harrington was born in New York City on February 14, 1912, the child of Herbert Harrington, a railroad porter, and the former Euzenie Turat, a recent immigrant from Austria-Hungary. Raised in an ethnically diverse neighborhood of the Bronx, Harrington’s childhood among a racially mixed family of limited means was challenging for himself and his four siblings. But from a very young age, he was an exceptional artist, and able to find solace by drawing satirical cartoons.

The New York public school system, recognizing Harrington’s artistic talent but blinded by racial stereotypes of the day, sent him to a Manhattan vocational high school designed to prepare students for a career in the textile industry. Harrington accepted the education, but kept his sights on cartooning and the flourishing black culture of the Harlem Renaissance. After finishing  his vocational training in 1931, he was able to enroll at the National Academy of Design in Manhattan. There, he refined his skills as an artist under the school’s accomplished faculty and earned a modest living as an actor, puppeteer, set designer, and cartoonist.

In 1932, Harrington began selling political cartoons to Harlem newspapers, including the widely circulated and influential Amsterdam News. He also began attending classes at New York University and became close, lifelong friends with the artist Romare Bearden. The Amsterdam News put Harrington on staff in 1935, and began regular publication of a series. Harrington first called it “Dark Laughter,” but later changed
it to “Bootsie” after its main character, an ordinary looking, somewhat corpulent resident of Harlem with a unique knack for revealing racial hypocrisy and irony wherever they were found. “Bootsie,” the first cartoon series by a black artist to break onto the national stage, cemented Harrington’s reputation.

During this period, Harrington increasingly associated himself with fellow left-wing and, in some cases, communist New York journalists. He continued to sell political cartoons, and took a position as art instructor in the Works Progress Administration, the Roosevelt administration program that employed thousands of artists during the Great Depression. Connections he made at the WPA led to his admission to the prestigious School of Fine Arts at Yale, where Harrington paid his tuition by continuing to sell cartoons and by waiting on tables. At Yale, Harrington won several awards for his art but also complained that many opportunities eluded him due to racism.

Harrington made an important connection in 1942 when Adam Clayton Powell, Jr., minister of the largest church in Harlem and future congressman, named him art editor of the new Harlem newspaper, People’s Voice. Harrington created a new comic strip for the Voice called “Live Gray.” The following year, he became war correspondent for Robert Lee Vann’s Pittsburgh Courier, one of the largest African American newspapers in the country. In Europe, as a reporter and political cartoonist, Harrington covered black units such as the Tuskegee airmen. He also entered into the first of three marriages, this one barely outlasting the war.

After the war, Harrington was commissioned by the National Association for the Advancement of Colored People to help conduct a public relations campaign in support of returning black veterans, who, as a group, had been poorly treated. But Harrington’s politics were not in line with those of the NAACP. He had a falling out with the organization in 1947, and resumed his career as a political activist and cartoonist by reviving the “Bootsie” series for the Courier. In 1950, he was named art editor of Freedom, a left-wing newspaper founded by the singer Paul Robeson, and took a position as art instructor at New York’s Jefferson School of Social Sciences, a school with a prominent position on the long government list of purportedly subversive

By 1952, it was clear to Harrington that he was walking straight into the teeth of the national crusade led by Senator Joseph McCarthy against left-wing activists. After he, himself, was questioned by the FBI over biting cartoons he had produced about the continued existence of lynching in the United States, and when one after another of his friends and associates was prosecuted or blacklisted, Harrington decided to leave the United States. Arriving in Paris, France, he became an important member of a community of expatriate black artists that included writers Richard Wright and Chester Himes, and supported himself, barely, by continuing to produce “Bootsie” for the Courier. Except for a second, equally brief marriage, and a short stint in England, Harrington remained in Paris until 1959 when he was honored with an invitation from the Soviet humor magazine Krokodil to serve as visiting artist. His acceptance, in the midst of the Cold War, did nothing for his political reputation in the United States.

Harrington entered the final phase of his life in 1961 when he left Paris for East Germany. There, he found a lasting marriage to Helma Richter, and an excellent position as journalist and cartoonist for communist state publications. Ironically, Harrington’s life and status on the other side of the Berlin Wall gave him the opportunity to travel extensively in the west, and in 1994, with the McCarthy era long over, he briefly returned to the United States as a visiting journalism professor at Michigan State University. After his death in Germany in 1995, Harrington was honored 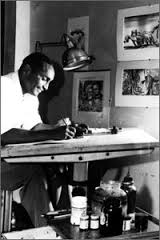 with the establishment of the Oliver Wendell Harrington Cartoon Art Collection at the Walter O. Evans Collection of African American Art in Savannah, Georgia.

Posted by SherrysJoy at 6:00 AM