Daniel “Chappie” James (1920 - 1978) dedicated his life to an extraordinary career in the U.S. Air Force. Over the course of three wars, in WWII, Korea, and Vietnam, he completed more than 160 combat missions as a fighter pilot. In recognition of his achievements, he received the honor of being the first African American in America’s armed forces to attain the rank of four-star general.

Born on February 11, 1920, Daniel “Chappie” James was raised in a family of modest means in Pensacola, Florida. His grandmother was the highly respected founder of a private school that produced a steady stream of success-bound African Americans for more than 40 years. James’ mother, Lillie Anna, encouraged her children to follow their dreams and, in her words, “be packed and ready to jump on board when the train pulls into the station.”

James’ passion was airplanes. When he was 17 years old, he considered enlisting in the Navy as a path to becoming a pilot, but was told African Americans could only be cooks or stewards. He then decided to enroll at Tuskegee Institute in Alabama. His academic goal was a degree in physical education, but he also knew that Tuskegee had started a government-funded civil pilot training program, and he immediately enrolled in it.

In 1940, the government converted the civil program into one designed to train Blacks for segregated flying units in the Army Air Force. By the time it ended in 1946, the Tuskegee program

created an elite group of just under 1,000 black pilots, and James was one of them. He proved to be a remarkably skilled airman, and his first assignment, in 1943, was to train more pilots. He was then deployed to an Army Air Force unit in Ohio. James’ final World War II assignment was with a unit stationed in the Philippines.

President Truman signed an order integrating the armed forces in 1948. While this marked the end of the black flying units, it did not mean the end for black pilots in the military. The Air Force (no longer a branch of the Army) put James in charge of an integrated fighter-bomber squadron in the Philippines.

James flew his first mission as a combat fighter pilot in Korea. Between 1950 and 1951, he completed 101 missions, first in the legendary F-51 Mustang and then in the Air Force’s first jet, 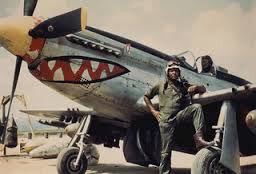 the F-80. When the Korean War ended in 1951, James was deployed to Otis Air Force Base in Massachusetts as an interceptor pilot, operations officer, and squadron commander. At Otis, James earned the rank of Major and had a chance to exhibit abilities beyond piloting. Sent out into the civilian world to perform community relations work, he was named “Young Man of the Year” for 1954 by the Massachusetts Junior Chamber of Commerce.

James next made a career decision to attend the Air Force Air Command and Staff College in Alabama. Graduating in 1957, he was assigned to Air Force Headquarters in Washington, where he remained until 1960, when he was sent to an Air Force unit at the Royal Air Force base in Bentwaters, England. There, he rose from wing operations director to squadron commander, and then to deputy wing commander. In 1964, James was assigned to Davis-Monthan Air Force Base in Arizona, serving as director of operations training and deputy commander for operations.
Meanwhile, a new war had began in Vietnam, and it was escalating in intensity. In 1966, James was stationed at Ubon Royal Thai Air Force Base in Thailand, serving first as deputy commander for operations and then as wing vice commander. These were not desk jobs: he would fly 78 combat missions from Ubon. A signal event in James’ Vietnam tour of duty took place on January 2, 1967, when he served as a flight leader for Operation Bolo, a secret mission designed to trick North Vietnamese fighters into engaging the F-4 Phantoms they had learned to avoid. Seven North Vietnamese jets were shot down, the most in a single mission during the war.

Late in 1967, his tour in southeast Asia completed, James was deployed to Elgin Air Force Base in Florida as vice wing commander. While at Elgin, James ventured into the public realm once more, giving presentations on the war and describing the Air Force’s success in providing opportunities for minorities. His career then took a giant leap forward in 1969 when the Air Force promoted him to the rank of Brigadier General and put him in command of Wheelus Air Force Base in Libya. There, James showed yet another side of his abilities. Faced with a demand from Libya to shut down base operations, he handled the affair like a seasoned diplomat.

In 1970, James returned to the Pentagon where he was given a succession of ever more prestigious positions. In March 1974, he became a Major General, but not for long. Just seven months later, he

was elevated to the rank of lieutenant general and named Vice Commander of the Military Airlift Command, the huge, far-flung organization responsible for flying U.S. forces, equipment, supplies, and materials around the world. James’ career reached its peak in 1977 when he became the first black military officer to attain the rank of four-star general, and was put in charge of NORAD, the North American Air Defense Command, in Colorado Springs, Colorado.

During this period, James began to experience increasingly serious heart problems. After serving briefly as a special

assistant to the Air Force Chief of Staff, he had no choice but to retire. He passed away in Colorado Springs in 1978 at the age of 58. Although his life was cut tragically short, his career in the Air Force was long and distinguished. In addition to the Distinguished Service Medal, his honors included the Legion of Merit, the Distinguished Flying Cross, a Presidential Unit Citation, and several honorary degrees. Daniel “Chappie” James blazed a trail of distinction for African Americans in the military.